If you aren't familiar with what a Bloom Filter is then you're going to find out how absolutely awesome they are. I have a detailed blog post that explains everything you need to know about Bloom Filters called Frequency analysis on hundreds of billions of reports at Report URI: Bloom Filters. If that isn't enough and you want to know even more, a Bloom Filter is a Probabilistic Data Structure and I have a whole selection of blog posts about them!

We use Probabilistic Data Structure a lot at Report URI but I did a demo of using a Bloom Filter to store and query the entire ~25 GB Pwned Passwords (v7) dataset with only ~2.7 GB of RAM, When Pwned Passwords Bloom! This blog post is the updated version for the latest release of Pwned Passwords, v8.

As you can't change the dimensions of a filter (m) after it has been created, the only choice you have would be to simply add the new items from v8 and take the hit on the probability of a false positive:

To help visualise it better, here's a graph showing p against an increasing value of n where m = 23,524,963,270 and as you can see, there's clearly a point at which the false positive rate starts to climb.

With a value of n = 847,223,402 for the new v8 data, we're well into the region where p is increasing quickly and this is why I'm re-generating the filter with new values.

Given the significant change in the size of the dataset, the best thing to do is generate a new Bloom Filter for Pwned Passwords v8. To maintain the same probability of a false positive, we're going to have to increase the size of the filter.

When we look at the graph for the new filter, consider that the y-axis for p has changed significantly, but we are still achieving the same value for p.

By increasing the size of the filter we can offset the impact of the increased number of items in the filter, but, the filter will need to increase in size from ~2.74 GB to ~3.78 GB. It's quite a large increase, but it's still an acceptably small amount of memory to use! It took ~17.5 hours to generate the filter.

As before, I did a basic set of queries against the filter to try it out.

As you can see, the filter is still blazing fast and actually, because of the changes I made, the performance of the filter isn't really going to change. Talking of performance, though, this tweet from Troy Hunt caught my eye...

Hey, want a fun little open source challenge? See how many requests you can make per second against @haveibeenpwned's Pwned Passwords API. Can you beat @stebets? Give it a go 😎 https://t.co/ILxuphHW79

I wondered just how fast the Bloom Filter could be so I grabbed the 100k passwords list from the NCSC and decided to run them against the filter!

Yep, that's pretty fast! Of course, all 100k passwords here should be pwned but it turns out there were some problems with the data and not with my filter, the filter is 100% accurate. You can see more details in this thread.

Something something @troyhunt wanted to know how fast we can query @haveibeenpwned Pwned Passwords? Looks like @stebets tried, but not hard enough 😎 pic.twitter.com/rhB07f242i

As before, if you'd like to download the Pwned Passwords Bloom Filter, here is the raw dump file and a zipped version for your consumption!

The latest version of PCI DSS just dropped and it's really awesome to see that one of the most notorious threats that we face online when it comes to payment... 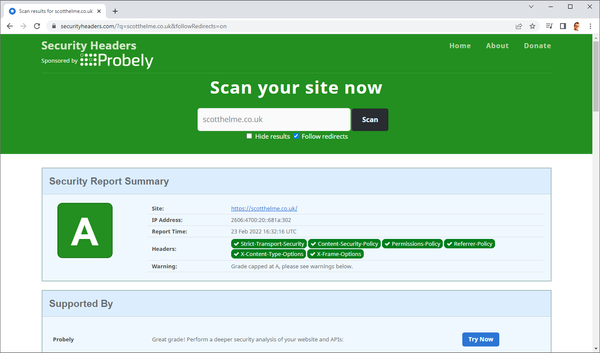 I recently started to consider changing the grading criteria on Security Headers which isn't something that happens very often. I wanted to make a change that would result in more...